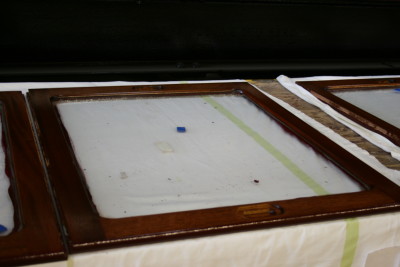 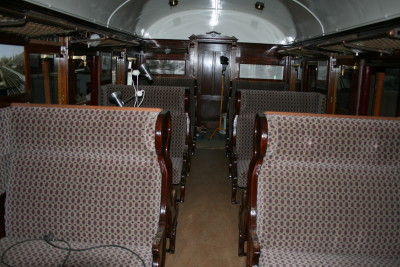 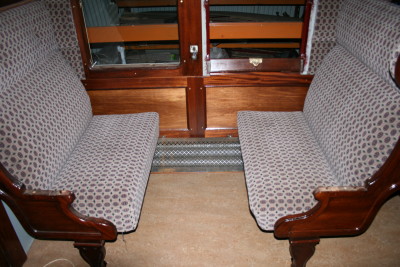 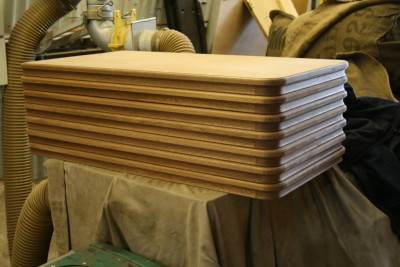 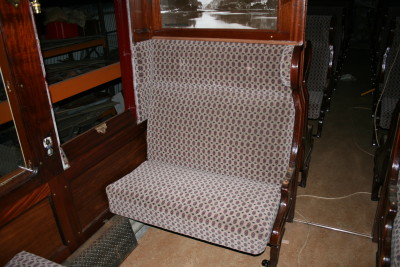 A summary of work completed on 7828 in the last few months. It has become difficult to update at times when the coach is changing so quickly, but for several months most volunteers were engaged in preparing large quantities of components- either trimming seat parts, machining timber mouldings, varnishing, glazing, painting underframe or searching for brass work.

So, state of play as of today-

All seat back and end units are fitted, lined up and bolted down. We need some more screws to finish putting the full quota into each anchoring bracket, but as soon as they land we can install them, leaving the way clear to bolting in the seat bases.

Bases all trimmed, some are awaiting their piping. 8 armests are finished, the other 20 are having piping applied.

The droplights have been rebuilt, glazed with toughened glass, assembled and sealed, painted to gloss on the outside and varnished inside. Specially made felt sections (20mm x 10mm and 10mm x 10mm) have arrived to allow us to fit new seals to each side, which help with vibration and sound proofing as well as facilitating a smooth slide. These are ready to pin on, and then it’s just the leather straps to apply with the cleaned and painted fittings prior to installing in the coach. Each droplight, for saloon or door, has already been tested in it’s own numbered aperture.

Tables- all parts now made to reproduce the original early Period 1 LMS TO table. We borrowed a genuine example from the team at Swanwick, and have produced a set of 14 in solid utile. The previously mentioned leg base castings are machined ready to go, and the fixing brackets and tabs are sorted into boxes. 7 table tops have been assembled to date, it’s a fill in job when we get an hour at the end of another task.

Toilets- sink and loo fitted in No.1 loo, all works. Loo seats and lids to varnish. Parts ready for No.2. New toilet roll holder cast and fitted. Paper towel holders sourced and mounted, bins procured. Vacant/engaged locks have arrived thanks for team based on ELR, modified to suit 7828 and now ready to fit. New left handed keeper plates have been cast and drilled. Some jiggery-pokery to convert the door locking system back to as-built is underway. The main door handles are now fitted and working.

Vestibules- not much gone on here, apart from draught excluders fitted around the side door apertures, as these areas have been virtually finished for some time. The clips to hold open the partition sliding doors were discovered and fitted.

Underframe- fusebox in process of being put back where it was meant to be, and some painting undertaken at the ends. Still gloss black to go on some bogies parts and the trusses, when we shunt it out again.