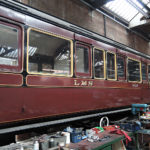 It’s a doubly good start to 2018 for us as we have just finished the restoration of CCT E94630 which will become our upholstery workshop, plus after a bidding process, ownership of Medical Examination Car 10825 has been transferred to us from the Museum of Science and Industry in Manchester.

The CCT is one of three donated to us by in 2001 by Jarvis Rail, and had been kept in the goods shed at Wakefield Kirkgate for many years along with a LMS BG which was also donated – unsurprisingly they were known as ‘the Wakefield Four’. E94630 was used for storage at Peak Rail and although we were keen to restore it events overtook us, and it was left on the back-burner. Then an idea was put forward to use it as an upholstery workshop and work started in earnest, especially as much rotten steelwork had to be cut out and new steel welded in. Everything has been done to a high standard including the interior which has new LED lighting and a full electrical installation. It was wheeled out of our workshop on 30 December and is now in its new position just awaiting the access steps to be built. The video shows the rollout and some of the team involved.

The Medical Examination Car 10825 was built by the Lancashire and Yorkshire Railway as a corridor third at Newton Heath in 1910. It was converted to a US continental ambulance staff car in 1917, then rebuilt by the LMS as a staff medical examination car numbered 10825 in 1923. It would have toured the LMS and London Midland Region conducting eyesight tests etc. It was eventually withdrawn in 1971 and initially preserved by the Historic Rolling Stock Group at the Severn Valley Railway, it then moved to Dinting Railway Centre in the care of The Bahamas Locomotive Society, then to the Museum of Science and Industry in Manchester in the early 1990s. A group of museum volunteers carried out a high-quality restoration, and a full repaint in early LMS livery. The then museum management wished the public to see how a carriage was constructed, and one end and a 10ft length of one side were therefore left unfinished.

10825 will be transported to the Rowsley to complete its restoration. Fortunately many drawings, including the bespoke furniture, are available, and as much as possible of its history and fabric will be preserved. It has one large central saloon and two smaller saloons one of which has longitudinal seating, while the other has transverse seating. The large saloon has no fixed seating so is a completely flexible space, it also has double doors each side. There are two toilets, one of which originally contained a stand-alone Dargue-Griffiths heating boiler, and two small changing rooms. The flexible large saloon will have appropriate seating and in conjunction with the smaller saloons will allow daily running with disabled access, dining, private parties, education and training, hospitality, and filming contracts. The disabled access provided by the double doors means we will not have to modify another of our vehicles.

So as always, plenty to keep us busy!