From LMSCA Wiki
8000
Jump to navigation Jump to search 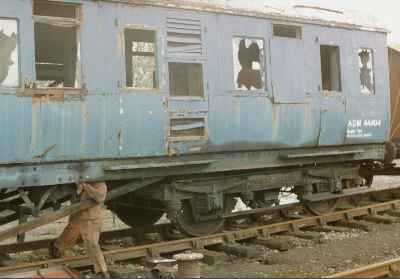 Comments: M44414, formerly 5939 (1926) and 8023 (1933) and M44404 formerly 5806(1926) and 8000 (1933) are both all-steel third opens built to diagram 1745 to lot 185 by Metro-Cammell Carriage and Wagon in Birmingham. Both were converted for use as boiler vans in 1960 in association with the Manchester to Crewe electrification scheme due to a shortage of electrically heated passenger stock. These conversions were used behind the electric locomotive to provide steam heating for through trains until sufficient dual heated stock became available. They could be seen until the demise of steam heating on British Railways in carriage sidings and at terminal stations where they provided pre-heating steam supplies to warm stock prior to attaching the train locomotive. 44004 with 44414, at the East Lancashire Railway resided there until relatively recently when both were scrapped. Converted in the 60s, no interior parts remained. Underframe components did however prove useful to the LMSCA and some of these were recovered to provide spare parts for those missing or in need of replacement on our LMS carriages. Another similar carriage 5682 (1926), 7991 (1933) sold to the Manchester Ship Canal Company, then to the Severn Valley Railway, to the Midland Railway Centre and now located at Peak Rail. This vehicle attended the 150 celebrations at Shildon and is now stored at Butterley.