From LMSCA Wiki
26986
Jump to navigation Jump to search 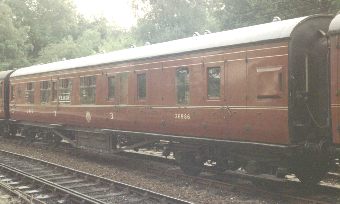 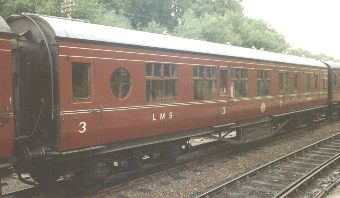 In Care of: Other Heritage Railway

Comments: 6986 a Porthole Brake Corridor Third seen at Highley some years ago. Although LMS in design it was built by British Railways at Wolverton Works in 1950 and rescued from Worcester in 1971 whilst in BR blue and grey livery. Here it is seen in the 1947 livery into which it was repainted at Bewdley in 1972. These particular BR built LMS designs incorporated some steel framework, notably to replace the wooden stringer along the body bottom sides, the corner posts and the cantrail. This was constructed no doubt as a precursor to the use of this material in the later all-steel LMS and British Railways Mark 1 carriages. Some of the later BR vehicles to LMS design even included standard Beclawat all-glass droplights as used in the Mark 1 stock built from 1951 onwards, examples of which can be seen on the LMS stock located in the SRPS museum at Boness in Scotland.