From LMSCA Wiki
1782
Jump to navigation Jump to search 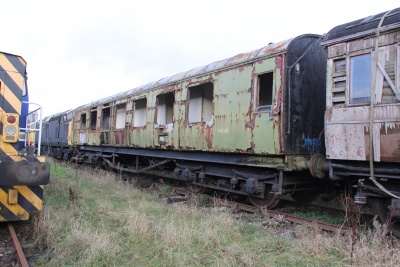 In Care of: Other Private Owner

Comments: This volunteer accommodation coach is former LMSR corridor third number M1782 pictured here whilst still on its reserved track at Goathland about 1996. It is built to diagram 1899 and one of a batch of 120 constructed at the Wolverton Carriage Works in 1934. Many other identical vehicles were constructed pre-war. Prewar, many main line corridor coaches were constructed by the LMS, very few of these remain in existence today however. After withdrawal, some were converted to Departmental use M1782 becoming a staff van for the CCE's fleet allocated to the Manchester district. The internal fittings were stripped and the coach fitted out for staff living quarters. On withdrawal in 1979, it was acquired by the NYMR with a view to conversion as a camping coach at Levisham a plan later superceded by its use for volunteer accommodation at Goathland, pictured here still in use for this purpose in the 1990s. Deterioration over a long period and the need to improve accommodation standards for volunteers resulted in the carriage being declared redundant. The North Yorkshire Moors Railway offered it to any seriously interested party for preservation rather than scrapping. This offer was taken up by a member of the Churnet Valley Railway who intends eventually to restore it to working order again. The coach is presently stored at Peak Rail.