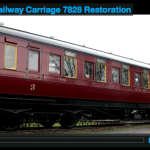 On loan from the National Railway Museum since 2003, this LMS carriage, 7828, has been restored by a dedicated group of volunteers. The carriage was built in 1925 at Derby’s Carriage and Wagon Works on Litchurch Lane. With restoration completed in its 91st year the transformation has been remarkable.

7828 was withdrawn from passenger use in 1962, but gained a further lease of life as part of the London Midland Region mobile control train. Eventually it passed to the National Railway Museum in 1980. Restoration was then started by apprentices at Derby Carriage and Wagon works with the intention of assembling a joint LMS/LNER main line set.

Although restoration was started, the work was not completed and the coaches were stored, 7828 going to York. Other vehicles in the collection represented the LMS, so further work was of low priority. Some years later volunteers from the LMS Carriage Association became interested and 7828 was moved to Rowsley.

Many hours of research and hard work by the dedicated volunteers have culminated in the restoration of an historic carriage as part of the nation’s heritage railway collection. One in which passengers will be able to enjoy a journey back to yesteryear. This video shows the many years of work compressed down into just over 4 minutes.

(Note: The piece of music used in the video is called Coronation Scot, which was purchased by the film maker who has an amateur film maker’s music copyright license, covering mechanical copyright and the Phonographic Performance License. Amongst the criteria, it allows the use British music for public exhibition promoted for raising of funds for bona fide charitable causes of which the LMSCA is one.)